Marine Fighting Squadron 221 (VMF -221) had sacrificed itself in a gallant but hopeless air defence of Midway Atoll. The Marine pilots had been outnumbered and overwhelmed by the deadly Zero fighters escorting the bombers of Vice Admiral Nagumo's first attack wave. It was now the turn of the Navy and Marine anti-aircraft gunners to defend their base. They had been watching the uneven air battle, and when it ended with the Japanese bomber formation largely intact, they braced themselves to receive the Japanese onslaught on their two small islands. 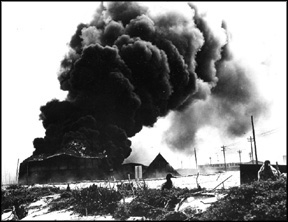 Oil tanks are burning on Sand Island after the Japanese air attack on 4 June 1942. The ubiquitous
Midway "Gooney birds" in the foreground, actually albatrosses, appear to be nonchalant observers.

From the recently installed large radar station near Colonel Shannon's command post on Sand Island, an operator counted off the range, height, and bearing of the Japanese strike formation as it neared Midway Atoll. At 0629 hours, this radar placed the incoming Japanese formation eight miles from Midway.

At 0630 hours, from Marine 6th Defense Battalion headquarters, Colonel Shannon issued the order "open fire when targets are in range". The Marines manning the 3-inch anti-aircraft guns and anti-aircraft machine-guns on Sand and Eastern Islands were protected in their emplacements and pits only by sandbags. The 5-inch seacoast gun batteries could take no part in air defence and they were screened from detection by camouflage netting. All personnel not manning anti-aircraft weapons, and whose duties did not require them to remain above ground, took shelter in dugouts or slit trenches.

One of those who remained above ground was the famous pre-war film director Commander John Ford. He took up a very exposed and dangerous position on top of the Sand Island power station and prepared to film the Japanese attack. That film would later achieve classic war documentary status. Ford marvelled at the calmness and quiet efficiency with which the Marines prepared to meet the deadly air assault.

The Nakajima "Kate" level bombers from carriers Hiryu and Soryu reached Midway first. The primary mission of Lieutenant Tomonaga's first attack wave had been to destroy the aircraft on Midway Atoll to protect the Japanese invasion transports approaching from the south-west against a Midway-based air attack. Tomonaga was dismayed to find the American air base on Eastern Island almost totally devoid of aircraft. He realised that the Americans had somehow been alerted to the impending Japanese air attack and had cleared the base of all aircraft. Never mind, he must have thought, those aircraft would have to return to Midway to refuel eventually and the Japanese would then destroy them. Meanwhile, there was other work for his first attack wave. The secondary mission of his level bombers was to neutralise Midway's anti-aircraft defences to clear the way for the following Aichi "Val" dive-bombers and strafing by the Zeros, and finally, to destroy installations. The Hiryu level bombers concentrated most of their attack on Sand Island. The Soryu level bomber group split into two separate squadrons. One squadron attacked Sand Island. The other squadron attacked airfield installations and anti-aircraft batteries on Eastern Island.

At 0631, Midway's anti-aircaft gunners opened fire on the enemy. The level bombers reported "vicious" anti-aircraft fire to Vice Admiral Nagumo, and two of these bombers fell victim to the intense ground fire. One of the Kate bombers crashed on Eastern Island. The other one burst into flames and splashed into the lagoon. Lieutenant Tomonaga's Kate was also a casualty, taking a direct hit in his left wing fuel tank. Although losing fuel, his aircraft would still be able to return to Hiryu.

Hiryu's Kates scored a direct hit on three oil storage tanks on the north-eastern tip of Sand island, sending a massive volume of oily black smoke streaming high into the air. Soryu's Kate squadron knocked out one of the Marine 3-inch anti-aircraft batteries on Sand Island. Captain Jean Buckner at 3-inch anti-aircraft D Battery sensed rather than heard the bomb that was plummeting towards his battery. His instinctive warning shout to "take cover" saved all but one of his men.

Damage to installations was less serious. A seaplane hangar was set ablaze and the Battalion laundry was heavily damaged.

The Aichi "Val" dive-bombers from Akagi and Kaga followed the level bombers. Their primary mission was to destroy aircraft hangars and other airfield installations on Eastern Island. Gordon Prange describes an extraordinary incident that preceded the dive-bomber attack:

The strike on Eastern Island opened with an incident which no one who saw it ever forgot. "Suddenly the leading Jap plane peeled off....He dove down about 100 feet from the ground, turned over on his back and proceeded leisurely flying upside down over the ramp." Some claim that he thumbed his nose derisively as he sailed by. A deliberate attempt to distract the defenders, a gesture of contempt for an enemy who had not shown the First Air Fleet much, or sheer bravado? Who can say? Whatever it was, for a few seconds it held the watchers too rigid with amazement to fire. Then "...suddenly some Marine said, 'What the Hell,' let go at him and then shot him down. He slid off into the sea."

The performing flight leader was the only Japanese dive-bomber destroyed, but four dive-bombers returned to their carriers damaged by Marine ground fire. 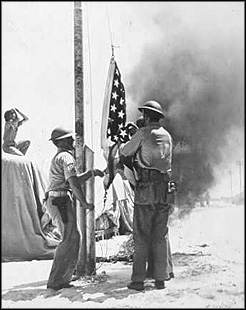 RAISING THE AMERICAN FLAG DURING THE JAPANESE ATTACK
During the Japanese air attack on Midway Atoll, it was drawn to Colonel Shannon's attention that the American flag was not flying above the atoll. When asked if the flag should be flying, he replied: "Yes, run her up", Marines grabbed a flag and ran to the flagpole. Ignoring the Zeros that were still strafing their base, they raised their flag as shown in this famous image.

The most serious bomb damage was inflicted on vital Eastern Island airfield installations. From his exposed perch on the roof of the Sand Island power station, Commander John Ford captured on film the destruction of a nearby aircraft hangar. He continued filming as debris from the exploding hangar hurtled towards him, and this extraordinary incident is captured in his memorable official US Navy film "The Battle of Midway". Commander Ford was knocked off his feet and wounded by the flying debris but survived to continue his distinguished film career after the war.

At 0638, the Eastern Island power house received a direct bomb hit that demolished it and knocked out its electricity generator and water distillation plant. Another bomb cut the lines from the main fuel storage and the dock area. Until power was restored and fuel lines repaired, all aircraft had to be laboriously refuelled manually from drums fetched across from Sand Island.

The Marine sector commander, Major William W. Benson was killed instantly when his command post on Eastern Island took a direct hit from a dive-bomber.

One bomb dropped by a dive-bomber exploded in the rearming pit of Marine Fighting Squadron 221(VMF-221) and caused eight 100-pound bombs and 10,000 rounds of .50 calibre ammunition to explode. Four maintenance men were killed.

Although they damaged important installations and fuel dumps, the Japanese carrier bombers failed to put Midway's vital aircraft runways out of action.

When the Zeros came in at low level to strafe Midway, the anti-aircraft gunners almost invariably found the Japanese fighters too fast to hit. Only one Zero fell victim to anti-aircraft fire, and it crashed in flames near the VMF-221 Ready Room.

Circling above Midway to study the damage inflicted, Lieutenant Tomonaga now had to deal with two unpleasant facts. His priority targets, the American aircraft based on Midway, had evaded him, and Midway's anti-aircraft defences were still putting up a heavy volume of fire. Tomonaga realised that there was need for a second strike at the atoll. He informed Vice Admiral Nagumo by radio at 0700: "There is need for a second attack".

The Roll Call on Midway

When the "all clear" sounded on Midway at 0715, four VMF-221 pilots had already crash-landed their damaged aircraft after struggling back to Midway. The commander of Marine Air Group 22, Lieutenant Colonel Ira E. Kimes, broadcast this message to his surviving fighter pilots who were waiting to land: "Fighters land. Refuel by divisions. Fifth Division first." When he received no response, he repeated the order several times. After still receiving no response, the unpleasant truth sank in. Colonel Kimes changed his message to, "All fighters land and reservice." Only six pilots answered this last desperate summons. Fourteen of the original twenty-six Marine fighter pilots failed to return, and several were wounded. Ten fighters returned to Midway, and of these, only two were airworthy. Having regard to the overwhelming superiority in combat of the Zero, the fact that most of the Marine aircraft were obsolescent, and the fact that they were heavily outnumbered by the Zeros, it is a powerful tribute to the quality of the Marine fighter pilots that ten aircraft were able to return to base.

The defenders of Midway Atoll bury their dead with full military honours after the Japanese air attack on 4 June 1942.

The Japanese account of their own losses over Midway varied, but Vice Admiral Nagumo admitted in his official action report to five lost in air battle (three level bombers and two Zero fighters) and four lost to anti-aircraft fire (two level bombers, one dive-bomber, and one Zero). Nagumo also listed as damaged sixteen level bombers, four dive-bombers, and twelve Zeros. Two of the Zeros were so badly damaged that they could take no further part in the Midway action. Prange takes a different view of the Japanese losses:

"Counting only those aircraft which the returning pilots actually saw go down in flames, the (Japanese) score is eight bombers for certain, and one probable; three sure Zeros and one probable. This gives a much more reasonable total, not too far at variance from the official Japanese figures."

On Midway itself, twenty men had been killed. Camouflage had effectively protected the 5-inch coastal guns, and much of the damage to installations was repairable. The runways had received so little damage that the US Navy commander Captain Simard believed that the Japanese had deliberately spared them for their own use when the atoll had been captured.