Russia acquires the Territory in Manchuria from which it had ousted Japan.

Germany now took advantage of China's military weakness by demanding a lease of Kiachow Bay and the adjacent port of Tsingtao on the coast of China's Shantung region for a naval base. These acquisitions would provide Germany with a naval base on the Yellow Sea directly opposite the western coast of Korea. The Chinese government agreed to Germany's demands. The Russians were furious when they discovered that Germany had secured the only good naval harbour on China's north-east coast, and they demanded from China a lease of the southern tip of the Kwantung Peninsula, including Port Arthur. China agreed, and in 1898, it granted Russia a twenty-five year lease of the strategic territory on the coast of Manchuria from which Russia, Germany and France had evicted Japan only three years earlier. The Chinese also agreed to allow the Russians to run a branch line from their Trans-Siberian Railway to Port Arthur. This humiliating development also realised Japan's worst fears. The military power of Russia had been brought to Japan's doorstep by means of an ice-free port.

The United States becomes a major Power in East Asia

The defeat of Spain in 1898 in the Spanish-American War brought a new and powerful player into the western Pacific region. As part of the fruits of its victory over Spain, the United States acquired the Philippines. Japan viewed this development with hostility. The United States possessed a powerful navy, and military planners in Japan realised that an American presence in the western Pacific could hinder Japan's plans for further territorial expansion. To meet this potential challenge, Japan began to prepare for the possibility of armed conflict between the two countries. For their part, American military planners recognised the risk to the Philippines from Japan's expansionist foreign policy and they also began planning for possible armed conflict with Japan. 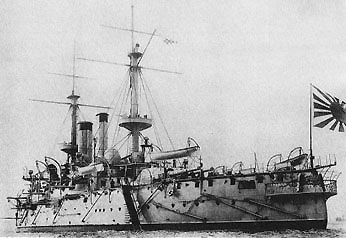 The key to Japan's victory in its 1904-05 war against Russia was the battleships acquired from Great Gritain and the Japanese naval officers trained by the British, such as Vice Admiral Heihachiro Togo.The 12,500 ton Fuji above, with four 12-inch guns, was built for Japan in British shipyards.

During the Boxer Rebellion in China, Russian troops occupied China's region of Manchuria to protect Russia's railway line to Port Arthur. When the rebellion was over, Russia did not withdraw its troops and attempted to take advantage of China's weakness by demanding increased political and economic influence in Manchuria. This increasing projection of Russian power in East Asia alarmed Great Britain and Japan. Britain was concerned to protect her commercial interests in northern China. Japan was concerned about the continuing presence of Russian troops in Manchuria, and the threat that they posed to Japan's national interests in Korea. To protect those interests, the two powers signed the first Anglo-Japanese Alliance in 1902. In a key provision of the alliance, Britain acknowledged Japan's special relationship with Korea. The alliance was clearly directed at Russia, and caused the Russians to back down publicly over their claim to a "sphere of influence" in Manchuria. Russia also agreed to remove Russian troops from Manchuria by September 1903.

However, Russia did not withdraw her troops, and secretly pressed demands at Peking for tighter Russian control over Manchuria. Militarists were in the ascendancy in the Russian government. They had the ear of Tsar Nicholas II, and they were determined to maintain Russian control of Manchuria and to challenge Japan's position in Korea, using military force if necessary. Japan had had enough of Russian scheming, and with the backing of its alliance with Great Britain, the imperial government sought an understanding with Russia in relation to both Manchuria and Korea in July 1903. While prepared to acknowledge Russia's special economic interests in Manchuria, Japan wanted China's sovereignty over Manchuria respected, and administration of the region restored to China. For itself, Japan wanted Russia to acknowledge Japan's political and economic interests in Korea. Backed by Japanese public opinion which was demanding an end to the Russian occupation of Manchuria, the Japanese imperial government had already decided to resort to arms if negotiations with Russia failed. When the Russians refused to agree to Japan's proposals, the imperial government broke off diplomatic relations with Russia on 6 February 1904. War was now inevitable.

On 8 February 1904, a Japanese naval squadron under the command of Admiral Heihachiro Togo launched a surprise attack on Russian warships at anchor in Port Arthur. Two days later, on 10 February 1904, Japan declared war on Russia.

The land war between Japan and Russia was fought in Manchuria. On 1 May 1904, a Japanese army entered Manchuria from Korea. Within a few days, two additional Japanese armies landed on the coast of Manchuria near Russia's leased Port Arthur naval base. On 26 May, Japan's armies succeeded in cutting the Russian lines and forcing the Russian army to fall back to Port Arthur. A number of indecisive battles then followed. Fighting was halted by the bitter Manchurian winter, except at Port Arthur which was captured by the Japanese at enormous cost on 2 January 1905. The largest battle of the war was then fought at Mukden (now Shenyang) between February and March 1905. Again the Russians were forced to retreat, but the result was not conclusive. Although Japan had nearly half a million troops in Manchuria, Russian resistance was stubborn, and Russia could call on massive troop resources. The war was close to stalemate when a new factor intervened.

Following the destruction of its Pacific naval squadron at Port Arthur, Russia had despatched its Baltic Fleet to the Pacific to challenge Japan's navy, and hopefully, destroy it and cut off the supply line to Japan's armies in Manchuria. After a long and leisurely voyage around the Cape of Good Hope, the Russian ships were badly in need of repair and their speed was hampered by accumulated marine growth. Even without these disadvantages, the Russians stood little chance. Their ships were either obsolete or obsolescent, crew morale was not good, and their crews lacked the leadership, seamanship, and gunnery skills of the Japanese. The Baltic Fleet was intercepted by Admiral Togo on 27 May 1905 as it was passing through the Strait of Tsushima which lies between Japan and Korea. With the advantage of British naval training and more modern british-built ships, Vice Admiral Togo destroyed the larger Russian fleet. 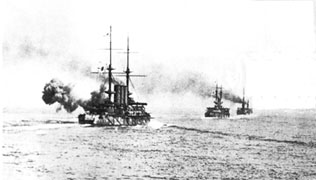 The Japanese battleship Asahi (foreground) opens fire on the Russian fleet at the Battle of Tsushima, 1905.

Despite the crushing Japanese naval victory at Tsushima, Russia was not defeated, and both powers were pleased to accept an offer by the American President, Theodore Roosevelt, to mediate. The war was proving to be a very heavy drain on Japan's human and financial resources. Russia was facing the threat of revolution at home. Both nations were battle-weary. The war was ended by a peace settlement arranged by President Roosevelt with the parties at Portsmouth, New Hampshire in 1905. The Treaty of Portsmouth saved Japan from economic disaster, and gave Japan control of Port Arthur and part of the island of Sakhalin. However, the Japanese did not receive financial compensation for the cost of the war. They felt cheated by this, and blamed the United States. 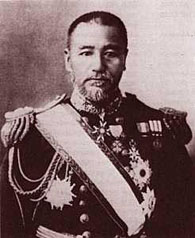 While both parties to this war were clearly pursuing imperialistic ends, it has to be acknowledged that Japan had reason to be concerned about Russia's designs on Korea and the threat that those designs posed for Japan's security. The war left Japan with international recognition that it was the dominant power in East Asia and that north-east Asia was its sphere of influence. Admiral Togo's victory at Tsushima firmly cemented Japan's position as a major naval power in the Pacific.

Japan seizes the Kingdom of Korea

With international recognition that Korea fell within its sphere of influence, Japan now began to tighten its control over that unfortunate country with annexation in mind. By 1909, extreme militarists were in control of the imperial government, and only a pretext was needed. It came with the assassination of Prince Hirobumi Ito in the Manchurian city of Harbin by a Korean citizen on 26 October 1909. The assassination produced public demand in Japan for annexation of Korea, and the imperial government was happy to oblige. With no international support for his country's independence, the king of Korea submitted when Japan's Minister of War presented him with the document of annexation to sign on22 August 1910.

Japan extends its Empire during World War I

World War 1 provided Japan with a golden opportunity to extend its territory far across the Pacific at little risk to itself. After siding with the Allies against Germany, Japan took control of German commercial holdings in China and occupied the German-owned Mariana, Caroline and Marshall island groups which lie in the Pacific Ocean between the Philippines and Hawaii. At the end of World War 1, despite strong opposition from the United States, the League of Nations granted Japan trusteeship over these islands. Japan now had an empire extending from the Asian mainland to the central Pacific, and had replaced Russia as the dominant foreign influence in Manchuria. To back its expansionist foreign policy, Japan had the third largest navy in the world after those of Great Britain and the United States, and the largest navy in the western Pacific.

Naval Limitation in the Pacific

The rapid transformation of Japan in the space of fifty years from a technologic-ally backward feudal country to an aggressive major naval power set alarm bells ringing in Washington and those European capitals with interests in the western Pacific. The British were concerned about Japan's intentions towards their colonies of Hong Kong, Malaya and British Borneo. The Americans were deeply concerned that Japan's newly acquired mid-Pacific island possessions lay across their lines of communication between the Philippines and Hawaii. To meet this possible threat, the Americans reorganised their navy into Atlantic, Pacific and Asian fleets, and stationed their most powerful battleships in the Pacific.

With the intention of avoiding a naval arms race with the Japanese, and reducing the potential for naval conflict in the Pacific, the Americans convened the Washington Naval Conference in 1921-22. The participating naval powers, including Japan, agreed to a tonnage ratio of 5:5:3 for large warships of the United States, Great Britain and Japan respectively. The apportionment of ship tonnage produced by the Washington Treaty was intended to prevent any one nation becoming a dominant naval power in the western Pacific, and recognised the fact that England had to protect an empire that stretched across the globe, while America had lengthy coastlines on two oceans and the Philippines to protect. The terms of the Washington Treaty were extended to 1936 by the London Naval Treaty of 1930.

For the naval limitation treaty to work, it was necessary for Great Britain and Japan to abandon their alliance of 1902, and they agreed to do so. In 1921, Japan and Great Britain entered into an alliance with France and the United States. This Four Power Treaty required each country to respect territory of the other members and provided for mutual assistance should any one of the four powers be attacked by another country. The political problems created by foreign powers contending for commercial interests in China were addressed by the Nine Power Treaty in 1922. Each of the nine powers, including Japan, agreed to respect China's sovereignty and territorial integrity.